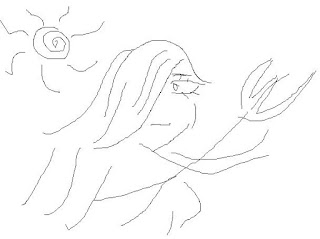 She is a  house maid ,  a middle-aged woman. She talks very little, comes on time, cooks my meals and leaves silently.

She is a widow, her husband died four years ago. She has only a young adopted son. She is educated and can read, write and speak English. Her husband was a rich man and she has lots of property but after her husband’s death some other people are enjoying the benefits of that property and she had been fighting it out in the court of law.

The other day, I overheard her speaking to some one over phone, most probably the person against whom she had had the legal fight. I understood from the conversation that she had won the case and things were to be settled officially in front of some government authority the next day. I was amazed at the way she spoke over phone.

She was saying something like this:
“I’ll come alone, only my lawyer will be with me.
I just know two things, you give me back my papers, and I’ll pay you the money then and there….
Don’t worry, I am an educated woman. You write in English or Hindi, I’ll follow…
I have won the case, and now you have no other options
And don’t shout like that.. I can also shout.. etc.. etc..”

I just kept wondering, how education can give confidence to people irrespective of their gender.. Also, how circumstances can make a strong man even out of an Indian lady....
Posted by ডঃ মাখন লাল দাস at 22:00